On Tuesday, NASA's New Horizons mission spacecraft is set to reach Pluto and will send back the first-ever close-up photos of the famous dwarf planet.

To celebrate this astronomy milestone, the University of Arizona's Flandrau Science Center and Planetarium, in collaboration with the Lunar and Planetary Laboratory, is hosting "Pluto Week," which will include a live video feed of NASA's New Horizons "Phone Home" event, talks, laser light shows and film screenings. For many years, Pluto was known as the ninth planet and the most distant one in the solar system.

But in 2006, astronomers reclassified Pluto as a dwarf planet because they realized that there were several other similar-size objects in deep orbit around our sun.

How long does it take to get to Pluto?

The time it will take the New Horizons spacecraft to reach Pluto is around nine years.

Its speed of over 36,000 mph makes it the fastest spacecraft to leave Earth's orbit. That's more thaan 100 times faster than your average jet airliner.

Pluto is not a particularly hospitable place, with temperatures hovering around minus-375 degrees Fahrenheit. Could there be life on Pluto?

"But inside the planet, as you go deeper and deeper and the pressure increases from the ice and rock that's above you, the material does reach a temperature, where, if there's water-ice, it can liquefy and become an ocean on the inside of Pluto, much like Europa and other worlds that we’ve discovered," Stern says.

"And if there's an ocean, then there’s a possibility of biology." 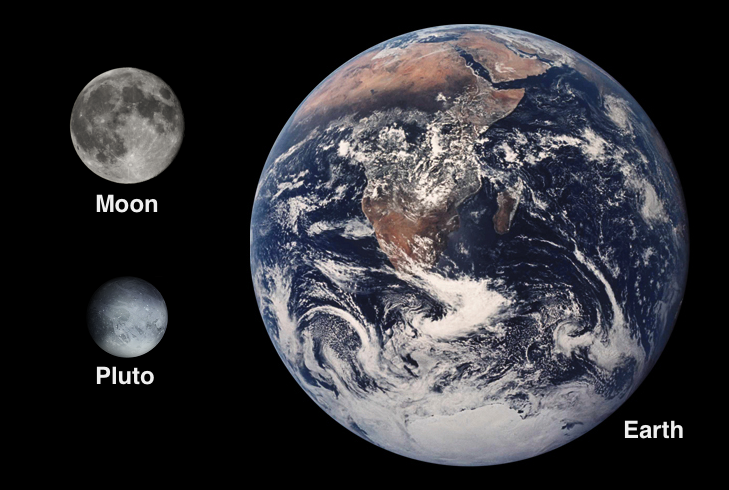 Pictures sent back from the New Horizons spacecraft will take about 4.5 hours to reach Earth, traveling at the speed of light.

The closest star beyond our solar system is more than four light-years away.

How large is Pluto?

Pluto is about two-thirds the size of Earth’s moon, but it is the largest object in the Kuiper Belt, a band of rocky objects that orbits the sun at the edge of the solar system and is named after Gerard Kuiper, the astronomer who founded the Lunar and Planetary Lab at the UA. Also, Pluto has less than 1 percent of the mass of the Earth.

So, if you weigh 180 pounds on Earth, you would weigh only 11 pounds on Pluto. We know that Pluto has five moons, but it could have even more. In fact, three of Pluto's moons were discovered only in recent years.

Pluto's moon Charon is more than half the size of Pluto itself, which led astronomers to originally classify the Pluto-Charon system as a "double planet."

Scientists also considered them "binary planets" because the smaller Charon does not actually orbit around Pluto; rather, Pluto and Charon orbit a common gravitational center.